The project was developed by the South Georgia Heritage Trust (SGHT) as part of their programme of conserving the island’s heritage. A group combining the SGHT and the archaeologists from the University of Cambridge made a 30-day expedition to study the heritage of the 18th and 19th century American and British sealers who worked and lived on South Georgia.

Detailed archaeological survey of the beaches where the sealers worked revealed information that adds to the sparse historical records and gives a better picture of the sealers’ inhabitation of South Georgia and their early impact upon the island’s ecology.

Following his visit to South Georgia in 1775, Captain James Cook reported the abundance of seals breeding on the island’s beaches. This attracted the attention of predominantly American and British sealers who descended on the island to harvest fur seals and elephant seals for their valuable pelts and blubber respectively.

The sealers were the 19th century equivalent of the better-known 20th century whalers in destroying populations of marine mammals and significantly altering the island’s ecosystem.

Whereas the whaling industry has left ruins of factories, which have been extensively studied, sealing sites have been overlooked. The scattered and fragmentary remains of sealing camps, ship wrecks and a few graves are the only concrete record of the early sealing industry. Little is known of these sites, which today are at risk of destruction and loss.

The most obvious relics of elephant-sealing are large cast-iron trypots, used to render oil from blubber. There are sometimes the remains of the furnaces – tryworks – on which the trypots were mounted. Remains of fur-sealing are known by only a few wooden pegs which were used for staking out pelts to dry. Using archaeological methods, however, further light upon this early industry may be revealed.

Relics of the lives of the sealers are seen in the caves and with remains of stone, brick and wooden huts in shore coves where they camped in what must have been appalling conditions. And there are grave markers that remind us that sealing was a hazardous occupation.

Over the years many artefacts have been removed and lost without detailed record. Now entire sites are threatened by erosion through storms or – ironically – through trampling by the hordes of seals that breed once more on the beaches.

It is important that these sites are comprehensively recorded and artefacts salvaged for their preservation and study before it is too late.

Accompanying the expedition was Neil Golding of the Coastal Habitat Mapping Project led by the South Atlantic Environmental Research Institute (SAERI) based in the Falkland Islands.

Where there were gaps in these broad-scale maps, or additional information was needed, fine-scale maps were to be developed using very high resolution (5 – 50cm) imagery, from satellites or drones. The drones were flown during the expedition to take high resolution images of the South Georgia coastline, which also provided useful images for the archaeologists.

The habitat models and maps produced by this project will provide an important baseline for use in conservation planning, decision making and monitoring by the Government of South Georgia & the South Sandwich Islands and other interested organisations.

You can find out more on the project website using the link below
or email the project manager, Neil Golding > 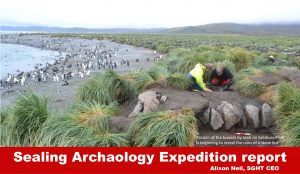 The project has completed its work on South Georgia.

Thanks to Our Supporters